In traditional Indian culture, the very terrible image of the Goddess Durga, the incarnation of the goddess Kali, is an angry image of the gods for the benefit of the world when the world is ruled by demons. Indians believe that although she is transformed into a terrible image, her heart is full of compassion and sees all sentient beings as the cosmic mother of the only child.

The appearance of the goddess mahakali was born from the Goddess Durga when she fought against the most ferocious demons. Her whole body was blue and black, her hands and feet were terrible, and she had great power. With her power, the gods wiped out all the demons. But when she killed the demons, her anger still could not be extinguished, It seemed to start to destroy everything. So the merciful Lord Shiva appeared himself and lay at her feet. When she saw her husband lying at her feet, she was completely stunned, so she quenched her anger, and her tongue was exposed and could not be taken back.

The image of Kali goddess is sometimes one side, four arms and two feet, sometimes multi arms, multi faces and multi feet. However, the common feature is that the body is blue and black, with three eyes and a new moon. It takes 50 Asura heads as a necklace, two heads as earrings, human arms as a skirt, and the upper body is naked. In the image of four arms, one hand usually holds a sword, one holds an Asura head, and the other holds a trident, She was holding a skeleton bowl. Her face was red with blood. 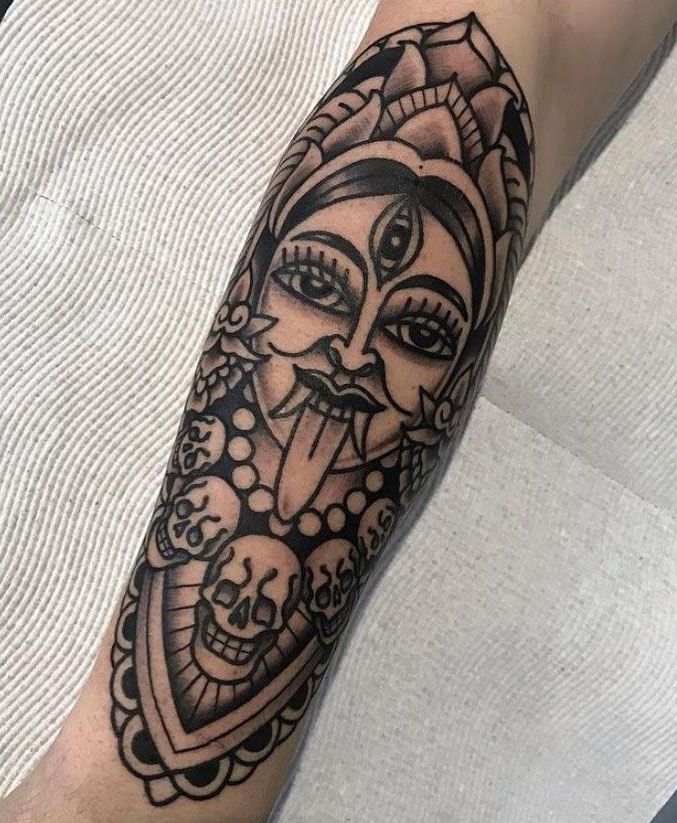